We get calls every week from concerned parents seeking a natural baby ear infection treatment for frequent pediatric ear infections.” This page is dedicated to just one of our successes with a pediatric chiropractic practice members.

Coralee H. was 3 years old when she came in to see us in November of 2014. She had suffered multiple pediatric ear infections from the time she turned 1 year old, getting what they termed “baby ear infections” about every 4 to 6 weeks and had finally had tubes put in February 2013 when they just couldn’t take giving her any more doses of antibiotics. She had undergone about 6 rounds, over 75 doses of antibiotics in her little 3-year-old body. Her body pushed out one of the tubes, the one in the left ear, and it became lodged in the ear canal and needed to be removed under anesthesia. Coralee resumed to have frequent ear infections, more frequently in the left ear. She was in pain, couldn’t sleep well and regularly had a “whooshing” sound in her ears. Her parent’s were at their wits end and decided to go the more natural route and talked to a friend that told them to check out a pediatric chiropractor and referred her to us at Austin Life Chiropractic. 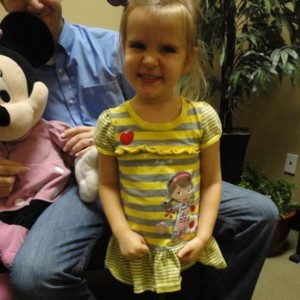 When we checked Coralee she had multiple postural distortion showing that there was stress on her motor nervous system, which can alter how her body deals with gravitational stress. This may not sound like a big deal, but when you realize that almost 90% of our energy goes towards keeping our body upright against gravity, leaving a mere 10% for other vital organ functions. Then when posture is altered that energy expenditure goes up, leaving less energy for healing and function. Posture is something every parent can check his or her child for relatively easily. Check if they tilt their head to one side more, is 1 shoulder higher than the other, feel their hips and see if they are level. As you can see from Coralee’s picture. Her left shoulder is higher than her right and her head is clearly tilted to the left side. Subtler is her hip tilt, which was to the right. Then we examined her lying face up and her left leg was about ¼ inch shorter than the right as well.

We then proceeded to check her atlas fossa temperature. This is the area right below the ear lobe where the transverse process of the Atlas, the top bone in the neck, which is known as the upper cervical spine, sits. The upper cervical spine is crucial to the relationship of the head to the body and is where the brain stem exits and changes into the spinal chord. Many vital functions are controlled in this area such as heart rate, respiration, pain, alertness, awareness and consciousness. This is also where every single neuron from the brain to the body passes. It is the most important area of the spine and one of the most vulnerable unfortunately. Coralee’s right Atlas fossa was 4.5 degrees hotter than the left side showing an imbalance in her upper cervical spine.

After Coralee’s 1st adjustment they didn’t notice much of a difference. On our side we saw her posture balance out more, her leg length leveled and her Atlas fossa temperature came down to almost perfect. After the 2nd adjustment Coralee reported having less pain in her ear. After the 4th or 5th adjustment all of the “whooshing” sounds were completely gone and she had no ear infections until the end of May of 2015. This was the first time she had been without ear infections, without the use of medical interventions – that long since she was a baby!

At that time we did a more thorough evaluation and discovered that some of her postural patterns and the Atlas test had changed sides. Children play and fall many times while growing up. This is probably what happened in Coralee’s case and the alignment of her Atlas switched to the other side. This is one of the reasons it is so important to get your children checked routinely by a family or pediatric chiropractor. It helps them grown up balanced so the muscles form equally on both sides, it also helps maintain a healthy immune system to fight off infections easier. It was also at a time that we were having heavy rains in Austin and mold was very high, which could have also aggravated her case further and is another reason to get checked routinely when coming up against physical, mental or emotional stresses. After we got Coralee adjusted a few more times with her new listing, her frequent ear infections have cleared up once again and she and her family couldn’t be happier. Please call Austin Life Chiropractic at +1-512-452-7681 to schedule a low cost exam.